I have survived the experience, now that it is over, but for 5 days (yes FIVE DAYS) I had to endured “THE HERD”.

Not sure what my humans were thinking but they agreed to “babysit” 2 other Schnauzers (another Miniature Schnauzer and a Standard Schnauzer) while their humans went on vacation. So Chopper (a male Miniature) and Frieda (a female Standard) moved into our house! Four Schnauzers in the house = a Herd of Schnauzers.

As you can see from the photos below, I was forced to become part of THE HERD. Unfortunately I fell prey to the “herd mentality” and followed the group around the house. It was if I could not control myself. My male human appeared to be the assigned “Shepherd” and “The Herd” followed at his heels around the house.

Having all those extra dogs in the house, and being an unwilling part of THE HERD, distracted me from my normal job of managing the humans. My humans were out of control – cuddling and loving on the visiting Schnauzers as if they were their own. They even slept in the bed with us!

My humans tried to indoctrinate the visiting Schnauzers into our twice daily walk routine. The first walk with two humans and four Schnauzers was sort of a disaster, but by the second walk it was better. The humans assigned the girl Schnauzers to the female human and the boy Schnauzers went to the male human. On the walks, the humans soon discovered they were no longer just dealing with a smallish poop bag of the droppings of two miniature schnauzers, but the droppings of FOUR Schnauzers including one Standard with larger poop offerings to scoop! 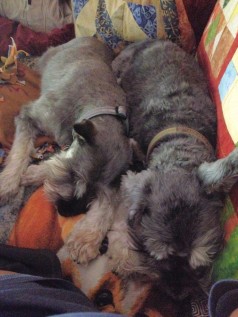 My adopted brother Mike, who the humans were concerned would not take well to the visitors, had a great time and played lots of outside (and inside!) ball with the visiting Schnauzers. As you can see in one of the photos above, Chopper and Mike really bonded and soon were nap-cuddling together on the sofa (it was nauseatingly cute and I had to put up with listening to my humans cooing over the sweetness)! Frieda, the Standard Schnauzer, made herself at home in the recliner.

Now that the visiting Schnauzers are back with their own humans, life is starting to get back to normal. It might take a small period of recovery, but soon I will have my humans under my paw again!